The Jane Austen Centre and Regency Tea Rooms in Bath 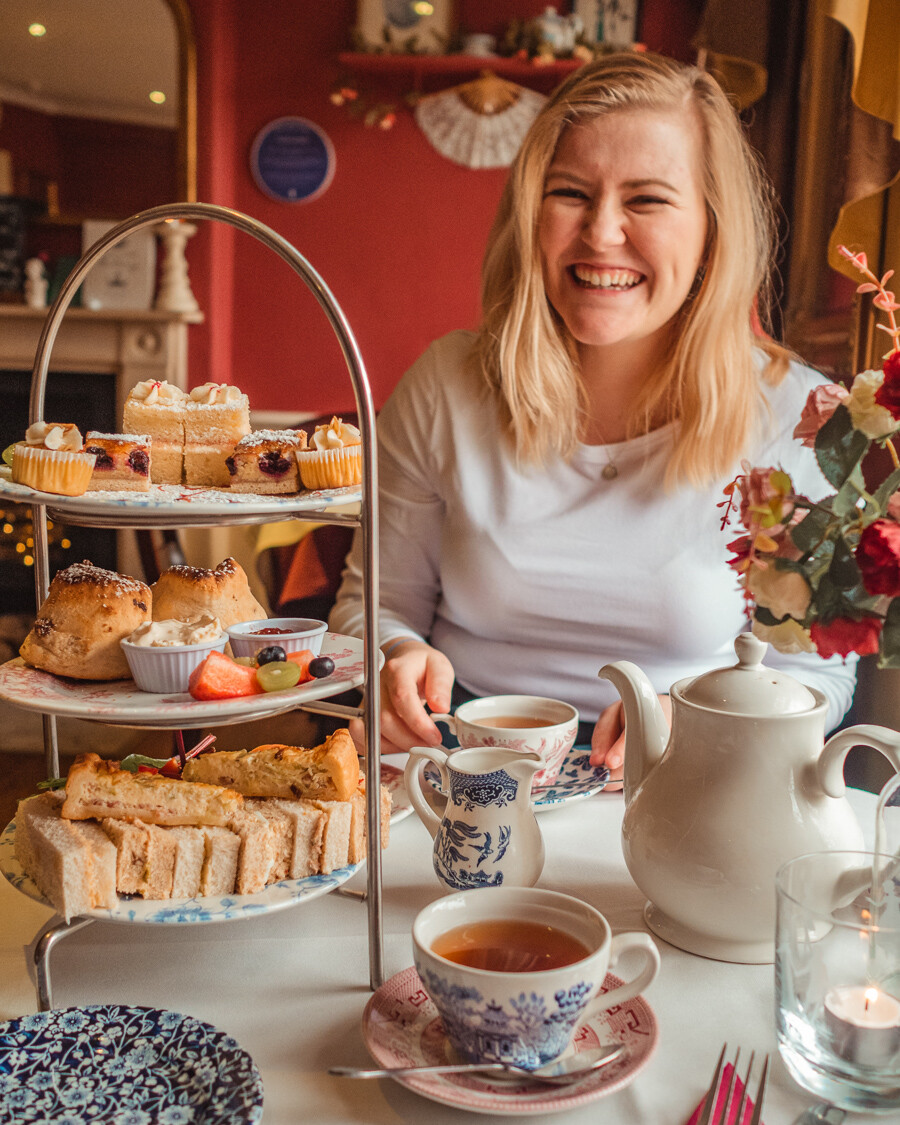 WELCOME TO THE JANE AUSTEN CENTRE

It’s not surprising that, despite only spending a rather small part of her life in Bath, the city has become a shrine of sorts for fans of Jane Austen.

Her stories, characters, and witty way with words are universally appealing. (And if you need proof: our table at tea was behind a group of grey-haired Japanese businessmen tucking into Jane Austen tea and scones!)

Every September, hundreds of people (men AND women!) dress in all their Regency finery, and gather at the Jane Austen Festival in Bath, for a week of workshops, reenactments and (of course), balls.

For those of you visiting outside of the festival dates, you can get your Austen fix at the Jane Austen Centre, on Gay Street – just a few doors down from where Jane and her family once lived!

The Regency Tea Rooms are warm and bright and cosy, with red walls, pretty table settings, and a whole load of Austen memorabilia dotted about – including the portrait above of Mr Darcy!

(Geeks that we are, we spent a solid ten minutes debating which part of the film this image is from.) (We still can’t decide.)

The staff all wear Regency period costumes, and name badges of characters from the books (our waitress was Eleanor Dashwood!), which I also think is such a fun touch.

You don’t have to do the exhibition to visit the Tea Rooms, but if you do want to take the tour: order your tickets online and visit the centre before noon, and you’ll get a pound off the entry price!

The Regency Tea Rooms don’t take bookings during the summer months, so if you’re heading over in the holidays, it might be worth going a little earlier in the day to miss the afternoon crowds. In winter, they only take bookings for large groups.

We paid for the full Darcy afternoon tea, which is £37 for two people and includes the tea. You can also pay extra for prosecco or champagne.

They also offer a slightly reduced version: the Ladies’ tea, with is just scones and sandwiches with tea; along with a savoury-only option, a selection of cake slices, buttered crumpets, and much more.

Their website states they do cater to allergies and dietary requirements, but I forgot to ask about these on the day so I’m afraid I can’t tell you much about them!

In terms of access: the building is three storeys high, and there is no lift. The main exhibition is on the ground floor with ramp access, but the tea room is right on the top floor, and the toilets are in the basement.

We’d skipped breakfast in preparation for stuffing our faces with afternoon tea, so by the time we arrived at 10:30, we were pretty starving.

Luckily, they don’t skimp on the food here!

On the savoury level, we had four types of sandwich on four different types of bread; warm Quiche Lorraine with perfectly crispy pastry; and a nice added touch of salad with a French dressing.

You don’t usually get that on afternoon teas, but it was a great treat for breaking up all the carbs!

The fruit scones were warm, but a tiny bit doughy in my opinion. Lucia had never tried scones or clotted cream before though, so she was in Seventh Heaven!

The cakes were all nice and fresh, but all three tasted strongly (and rather bizarrely) of almond. So if you’re not a fan of almonds this might not be the one for you. The lemon cake was our favourite, with the mini Victoria sponge slices coming in at a close second.

Tea is included, and you have an option of several different types. We opted for the Jane Austen blend (well you have to, don’t you?) which is a delicious China tea that’s not too weak or flowery.

PS. My favourite part was the “Mr Darcy” scrawl in raspberry sauce on the top plate!

After tea, we popped down to the exhibition, where Caroline Bingley introduced us to the Austen family tree and gave us a quick history lesson on their fates.

(Side Note: my grandfather was reverend of the same church that Jane’s father George was. I’ve been fascinated about Jane’s life ever since I found that out a few years ago!)

Then we filed downstairs to take a look at her portraits, and read more about her life both in and out of Bath, and how her experiences in the city shaped her writing.

We also learned a bit more about the politics and society of Jane’s time, which gives her love stories a lot more nuance than we really appreciate as modern readers.

Then there’s a fifteen minute video about Bath and Jane, narrated by the dashing Mr Wickham (Adrian Lukis from the 1995 BBC adaptation of Pride and Prejudice).

And then, the bit we’d really been waiting for: dress up time!

There is actually only one confirmed portrait of Jane Austen in the world, drawn by her sister Cassandra.

The little image we usually see on the back of her books is a Victorian-ised version of that drawing, and everyone agrees it’s probably not what she looked like in real life. (Apparently Jane’s niece called it “hideously unlike” her!)

But in 2002, and thanks to the advances of modern technology, the Jane Austen centre commissioned a forensic artist, Melissa Dring, to create a new portrait of Jane, based on the descriptions written by her friends and family in letters and diaries.

Then, in 2011, they commissioned a wax sculpture my Mark Richards, based on the new portrait, which was unveiled in 2014.

It’s pretty amazing to think that maybe this is actually what Jane Austen looked like, and also kind of crazy to know we’ll never reaaaally know whether it’s true or not.

It doesn’t really matter either way, because her books, her words, her observations, and her thoughts have endured where her face hasn’t. And in the time we live in now, that’s somehow kind of comforting.

If you’re a Jane Austen fan, or just fancy learning a bit more about her, then I really recommend visiting the Jane Austen Centre in Bath.

We arrived at 10:30am and were out again by 1ish, so it’s not too long a morning, and it would be especially great on a rainy day!

Tickets are £12 (or £11 if you go for the early morning discount), and this includes discounts in the Tea Rooms and gift shop as well. (I bought a DVD copy of the Felicity Jones adaptation of Northanger Abbey!)

You can book your tickets through the Jane Austen website.

Afternoon Tea at the Meridien Hotel in…

Where to Eat in York

PREVIOUS POST
"Where to Eat in San Francisco (with colour-coded map!)"
NEXT POST
"TRAVEL ITINERARY: What to do on a Weekend in Jersey | AD"