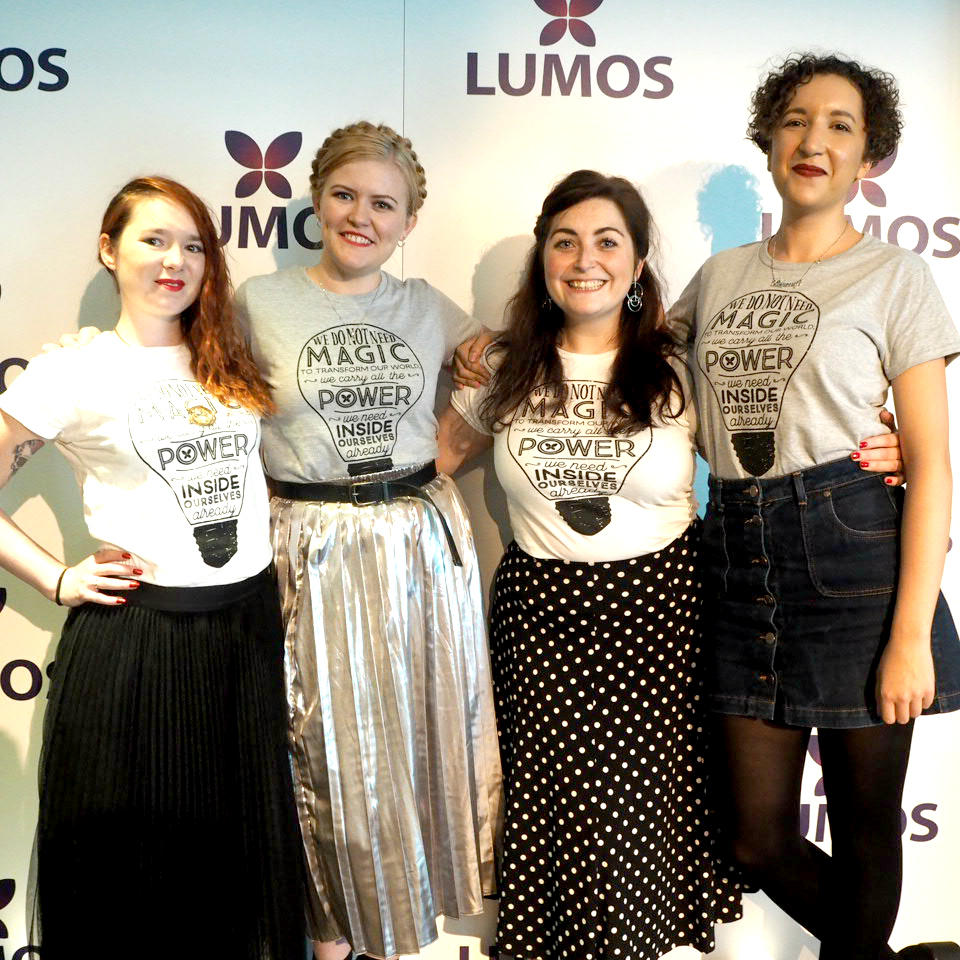 Once upon a time, J.K. Rowling (author of the Harry Potter books, Twitter Queen and general #BOSSWITCH) founded a charity called Lumos.

Now, I’m going to be utterly honest here: until about 6 weeks ago, I didn’t reaaaally know what Lumos did. I’d heard of it, and I knew they worked with children, but that was about it.

Then, a few weeks ago, I was asked to become one of the ambassadors for their new campaign: #WeAreLumos.

The charity held an ambassadors’ breakfast at The Hospital Club, to launch the new campaign, and Charlie, Katie, AJ and I were invited along to learn more about Lumos and the amazing work they do worldwide.

(I also got to meet Evanna Lynch, hear JK Rowling give a live speech, and watch The Cursed Child for a second time – eeek!)

“Lumos, which many of you will know as the light-giving spell in Harry Potter, is a charity I founded to help the eight million children who are growing up worldwide in institutions.”
– J.K. Rowling, The Cursed Child Lumos charity gala, September 2016

It’s literally the population of London.

And eight million isn’t even an exact number, because most countries in the world don’t actually have a complete census of these kids.

And here’s your next nugget of shocking information: around 80% of institutionalised children aren’t even orphans.

When we hear the word “orphanage”, most of us think of a place where kids are sent when their parents die, or when their homes are deemed an emotionally or physically unsafe environment.

But actually, around 80% of children are in institutions because their parents simply can’t afford to keep them at home, whether through poverty, disability or discrimination.

A lot of these families are being told that if they put their kid in an “orphanage”, their child will have the life their parents can’t afford to give them. They honestly think they’re doing what’s best for the child.

But, unfortunately, this is rarely the case:

“Eighty years of research agrees that children raised in institutions suffer physically, intellectually and emotionally. A recent study suggested that one in seven are likely to be involved in prostitution when they leave, one in five will go on to have a criminal record and one in ten – ONE IN TEN – will kill themselves.”
– J.K. Rowling, The Cursed Child Lumos charity gala, September 2016

“We advocate for children at the highest international levels; we help the money flow in the right direction to create community-based services that support families; and we work with individual children to get them back home, where they belong.”
– J.K. Rowling, The Cursed Child Lumos charity gala, September 2016

The excellent news is that in the last six years, the team at Lumos have already made incredible progress.

At the campaign launch, we heard from Warwick Davis (Professor Flitwick in the Harry Potter films) about what he’d seen on a Lumos trip to Moldova, and his thoughts on the work being done with disabled children living in institutions.

Evanna Lynch (Luna Lovegood in the films) spoke about her experience visiting some of the terrible orphanages in Haiti, as well as the more positive changes happening there because of Lumos.

(Side note: Evanna is a total BABE. After we’d had our t-shirt photos taken, she came over and was so friendly and nice. We chatted about blogging, and then we all crowded round her phone to watch Chris Martin on her Snapchat. So normal, much lovely.)(And she also said she liked my skirt, which has basically validated all my fashion choices ever.)

Then Georgette Mulheir and Billy DiMichele, two of the charity’s executives, explained more about the work that’s being done, as well as what’s already been achieved (spoiler: a lot!)

They also let slip that Queen Rowling covers ALL the running costs of the charity herself. 100% of it. That means that every single penny fundraised and donated by the public, goes straight to the programmes run by Lumos.

HOW AWESOME IS THAT?! If I didn’t love her before, I certainly did after that little piece of info!

After our breakfast talk, everyone packed up and skipped (yes, actual skipping was involved) over to the Palace Theatre, for a special Lumos gala performance of Harry Potter and the Cursed Child.

The show was as brilliant as it was the first time I saw it, and it was interesting to watch it knowing the plot and what was going to happen, as it made me much more aware of OTHER things going on, things I didn’t notice the first time round… #KeepTheSecrets

The cast were stellar, especially Stuart Ramsay, who had his debut as Harry Potter’s understudy and did a FANTASTIC job. (Imagine doing your first understudy performance in front of not only J.K. Rowling but half the UK’s celebs and their families as well… I think I’d have crumbled!)

But the highlight for me was before the performance even began, when J.K. Rowling took to the stage to deliver a speech that absolutely, definitely DIDN’T make me cry…

(You can read the whole thing here!)

Wondering what’s with all the snazzy matching t-shirts? Well here’s the info.

They are LIMITED EDITION.

They’re only available to order HERE until October 3rd (Mean Girls reference duly noted and appreciated). Once all the orders are in, t-shirts will be dispatched by the 19th of October (no wasteage, and no chance of them selling out, as they’re made to order!).

The price is marked in dollars, but it works out around £32 (including shipping to the UK). At least 60% of the cost will go directly to Lumos’ projects.

Guys they are reaaaally good quality, comfy and awesome. I love mine, and I actually have another one on the way, as I didn’t realise we’d get a t-shirt in our ambassador packs and I’d already ordered the baseball style one!

You can never have too many Lumos t-shirts right?

If you can afford it, get involved, order yours today and let’s help bring some of those children home to their families.

BUY THE T-SHIRTS HERE NOW.
(TIME TURNERS WILL NOT HELP YOU IF YOU MISS THE DEADLINE.)

37 THOUGHTS I HAVE WHEN I’M SUFFERING…

The Struggles Of Being A Third Culture…

Five Things Blogging Has Taught Me About…