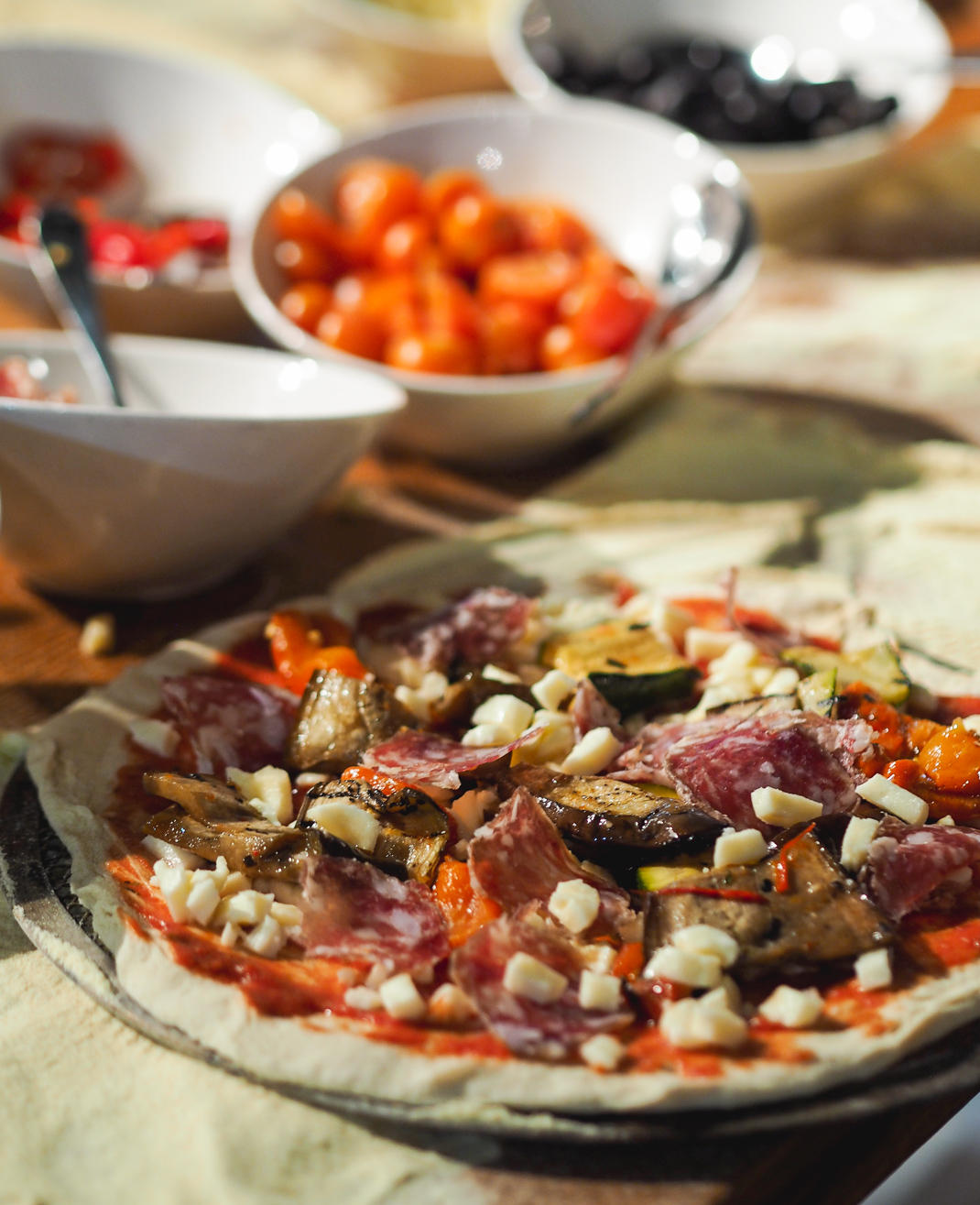 It’s something we used to do as a family every few months at home. Mum would make the dough and stretch it all out. Then the rest of us would drizzle on tomato sauce and the toppings of our choice.

I’ve never actually made the dough myself though, and it’s something I’ve been meaning to try at home for aaages. So when Hot Joint invited me to their pizza-making event at Ponti’s, I couldn’t resist!

We started the night with drinks: an Aperol spritz each is included in the pizza-making package, but I reaaaally don’t like Aperol, so I had wine.

(Side note: Bill Nighy just walked past my reception window at work, and smiled at me, and now I’ve completely lost my train of thought… Bill ♥︎) (PIZZA. Right. Pizza.)

Our lovely Chef handed out stripy aprons, and gave us a quick intro to pizza-making. We didn’t actually get to make the actual dough in the end (I think Jamie Oliver has a pretty good recipe for it though, if you’re looking), but he did teach us the art of shaping the perfect pizza base.

HOW TO SHAPE A GOOD PIZZA BASE

You start with a ball of fresh pizza dough, and a dusting of semolina on the work surface. (Semolina gives a nicer texture and taste than using flour. You know that graininess you get on reaaaally good pizzas? That’s semolina.)

Begin by gently patting the dough down flat with your palms. Don’t prod it with your fingertips, or bash it with your fists (which is what I did, and is apparently a big no-no!). Just tap it with both hands until it’s as flat as you can get it that way.

Once it’s just a few of centimetres thick, gently start to pull the dough out and around, as you pat down. You’re basically aiming to pull it into a circular shape.

The final step is the tossing!

Once your pizza is millimetres thick, and reasonably round, lift the dough and stretch it over both hands. Gently move your hands apart, letting the weight of the dough stretch itself out. Finally, you can start to carefully throw it up in the air, and spin it into its final shape.

(Sorry, it’s so much harder to explain than it is to actually do it!)

(I actually had one of the other blogger’s shoot a video of me doing it, which I was planning on posting here. But I somehow managed to delete it before I even got home. So that’s helpful…)

The aim is to achieve a pizza base that’s super thin in the centre, with a ring of thick, crusty goodness around the edges.

Once you’ve got that: it’s toppings time!

Apparently you’re only meant to use three tablespoons of tomato sauce in the centre of a medium-sized pizza, but I obviously totally ignored that rule. (Why just three?! The sauce is one of the best bits!)

We piled our pizzas high with our own personalised combinations of crumbled mozzarella, roasted veggies, salami, cherry tomatoes, olives, chillis, basil, and artichokes.

I chose salami, roasted veg and extra cheese on mine, then marked it with my little number sticker, and sent it off to the kitchen to be baked in the pizza oven.

Ten minutes later, my pizza was delivered back to me: hot, golden, with a beautifully crispy crust, and the perfect ratio of toppings and cheese.

A pretty damn good first attempt at pizza-making I think!

I had SUCH a great time doing this.

Cooking has become a real passion recently, and I thoroughly enjoyed learning the technique of stretching and tossing my own pizzas. It’s not something I think I’d have time for on a weekday, but as a fun weekend activity? Definitely something I’m going to rope Gary into trying at home!

And even if the cooking bit isn’t your cup of tea, I can fully recommend their food anyway! Obviously the pizzas are great, but honestly? My main reason for going back would be the gelato.

We all chose different flavours, and came to the mutual conclusion that the salted caramel gelato was like nothing we’ve ever tried on this earth. No word of a lie, it was better than the one I had in Rome last year.

Other flavours to try: the buttery pistachio, and the rich chocolate and amaretto. Both SO good… but still not quite as good as the salted caramel.

If you’d like to give it a go, check out Ponti’s Pizza Scuola website for more info.

It’d be such a great activity for a birthday, or even as a work bonding event or something!

PS. They’ve also got another restaurant in Sheffield, but the cooking school is only in London I’m afraid!

*I was a guest of Hot Joint and Ponti’s for this event.
All thoughts, photos, and awkward dough stretching explanations are my own!

Dinner at Min-Jiang in Kensington

Dinner at Carmen Tapas in Clapham

Learning How To Carve Spanish Jamon with…